Why Should We Celebrate Indian Christian Day? 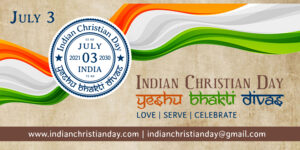 Congratulations to the Calgary Organizing Committee of the Indian Christian Day/Yeshu Bakti Divas. Great to see several churches co-operating to come together to celebrate. I believe this is the only community in Canada to celebrate ICD/YBD in such a public way this year. We can praise God for the worship teams singing in different languages. Hope this is a beginning of many more celebrations in the years to come. The banners and posters are super well done.

I received a phone call from a concerned Indian Christian in mid -2020 about the misinformation that was published and promoted about Christianity in India. Unreliable, speculative and false information were being circulated. Two pertinent themes were:

With the COVID lockdown in the fall of 2020, I was engaged in lots of phone and zoom conversations with the Indian Christian leaders of how to address this growing negative propaganda in India. There was a general consensus that our approach to address this misinformation should be positive and should address the ignorance about Christianity’s origin and contribution to India. The decision was made to focus on the martyrdom of the Apostle Thomas on July 3, 72 AD and declare it as INDIAN CHRISTIAN DAY/ YESHU BAKTI DIVAS. A formal declaration of ICD/YBD was crafted and published in multiple Indian languages.

Lay leaders began promoting the launch of July 3, 2021 as ICD/YBD for a ten-year period. The leaders of churches and denominations were personally invited to promote and participate in this grassroot movement and many enthusiastically did. There is no hierarchical structure controlling the movement. It is an infant grassroot movement which we expect to grow each year in India and the around the globe

God of the Bible is a God of celebration. We read in the Old Testament that God instituted several celebrations for the people of God.

Today on ICD/YBD we are celebrating the person and message of Jesus Christ. We are grateful one of His own disciples, Apostle Thomas arrived in India on 52 AD. After two decades of ministry in Kerala and Tamilnadu, he was martyred on July 3rd, 72 AD. Today is the 1950th anniversary of his martyrdom.

On July 3rd, 2021 we had ONE global digital launch of ICD/YBD with the call Christians to LOVE, SERVE, CELEBRATE. With this launch, thousands were exposed to the need, purpose and significance of the ICD/YBD movement. There were also dozens of celebrations all over India. Several were over digital platforms, and many were in person. This year, in addition to tens of ICD/YBD celebrations all over India,

there are celebrations in different parts of the world – in the United States, Singapore, Philippines, South Africa, UK and here in Canada.

From its inception the vision was to keep celebrating July 3rd as ICD/YBD from July 3rd 2021 to July 3rd 2030. It is hoped that the decade of celebration will significantly enlist ever-widening numbers to participate in India and all over the world. This decade of festivity observance will culminate with the Global Church celebrating the 200th anniversary of the birth of the Church.

There are four simple reasons:

In obedience to the Great Commission the disciples of Jesus went in different directions. Mark went on to Alexandria, Egypt and established the Coptic Church.

We should give thanks to God Almighty for allowing St. Thomas the Apostle, one of Christ’s 12 disciples to come to India. Yes, the doubting Thomas came with his followers to the southwestern shores of India in 52 AD and established at least seven churches in Kerala. Then he went on to Tamil Nadu and shared the Gospel. After 20 years of ministry, Thomas was speared down on July 3, 72 AD in Chennai. The Church was initially established in India right in the first century. This historic beginning is something Indian Christians should always be always thankful for.

In recent years, there is a persistent move in India in some quarters to re-write history. They try to deny that Apostle Thomas came to India in 52 AD. This is an attempt to erase documented history and propagate that Christianity was brought to India by colonialists like the Portuguese and the English. With this they hope to conclude that Christianity is colonial, Christianity is a Western and not an Eastern religion and Christianity is foreign to the ethos of Indian society and culture. Their obvious assumption, if you are truly Indian then you should not associate or practice Christianity.

As we celebrate ICD/YBD we are communicating and reinforcing, the historical facts about the establishment of Christianity in India nearly 2000 years ago. We need to highlight the many dimensions of society was impacted by Christianity.

We must stand with over 30 million Christians in India. We must also embrace two realities simultaneously:

In FIOCANA’S first Annual Report in 2022, there were 761 reported courses of ill- treatment of Christians in India in 2021. In the first five months of 2022, there has been a staggering 207 reported cases. Christians everywhere need to stand in solidarity with fellow disciples in India who face unjustified intimidation and violence.

May your efforts this year to celebrate ICD/YBR be multiplied many more times with hundreds more joining you in future ICD/YBD events.

1 thought on “Why Should We Celebrate Indian Christian Day?”